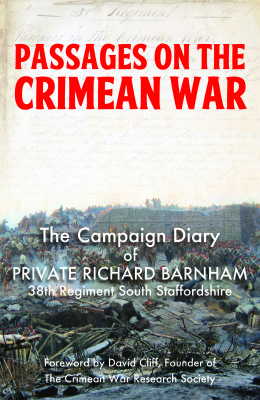 Passages on the Crimean War

To view images of the original 80 pages of Richard Barnham’s journal, click here.

In 1854, a quarter of a million British soldiers headed east to fight in the Crimean War. Together with their French and Turkish allies, the goal was to destroy the Russian Navy, together with their naval and military facilities in Sevastopol, thus keeping them from the seizing control of the Black Sea and thence the Mediterranean. They succeeded, but not without considerable hardship, suffering and loss of life – over twenty-one thousand British men fell to enemy fire, accidents and disease.

Many first-hand accounts of the war were penned by British officers, but few were written by the common soldiers, as most were illiterate. As such, this account by Private Richard Barnham offers a rare insight into the daily lives of the soldiers serving in the Crimea. The passages he recorded during the war are not always an easy read, detailing as they do many of the hardships of campaign life, the devastation of the cholera outbreak (which killed almost twice the number of those who died in battle) and the horrors of the military engagements. But Richard also gives great insight into the richness of the Crimean countryside and its people, together with the camaraderie of the soldiers themselves and the patriotic fervour that propelled such men to fight for their country.

FOREWORD by David Cliff, Founder and Vice-President of the Crimean War Research Society

Disclosure of Material Connection: Some of the links in the page above are "affiliate links." This means if you click on the link and purchase the item, I will receive an affiliate commission. I am disclosing this in accordance with the Federal Trade Commission's 16 CFR, Part 255: "Guides Concerning the Use of Endorsements and Testimonials in Advertising."